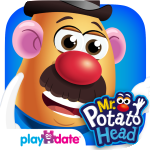 NEW YORK, April 7, 2016 – MR. POTATO HEAD is starring in his first-ever interactive storybook app—MR. POTATO HEAD: SCHOOL RUSH, by PlayDate Digital, under license from Hasbro, Inc. If you are ready for a thrilling adventure, tap, swipe, shake, and pinch your way through the action as MR. POTATO HEAD comes to life in a cinematic, and oftentimes goofy, tale!

When MR. POTATO HEAD tries to get you to school on time, you can expect as many twists and turns as the number of detachable parts on his body. An exciting, interactive saga awaits when you try to keep MR. POTATO HEAD in one piece! This is a story you’ll want to read (and play!) again and again, perfect for young readers and their families.

“PlayDate Digital consistently does an incredible job of combining fun, age-appropriate storytelling with highly entertaining and educational content. We are excited to have them bringing MR. POTATO HEAD, one of Hasbro’s most iconic brands, to life in a whole new way,” said Greg Lombardo, Vice President of Global Brand Strategy and Marketing for Hasbro.

“We love MR. POTATO HEAD and are excited to be telling his stories in a new, interactive way! MR. POTATO HEAD: SCHOOL RUSH offers a digital frontier for a classic, beloved character, the spud-liest hero of them all! It’s a great way for MR. POTATO HEAD fans to engage with this character and a unique story,” said Shaan Kandawalla, co-founder of PlayDate Digital.

Grabbing MR. POTATO HEAD a new hat or cranking up the Parts-o-Matic machine is enough to send you and your potato pal on a wild ride! One minute you’re in his Parts Emporium and the next you could be anywhere, doing anything…

MR POTATO HEAD: SCHOOL RUSH is available for $3.99 in the App Store on iPhone, iPad, iPod Touch, and Apple TV or at www.applestore.com.

PlayDate Digital Inc. is a publisher of high-quality, interactive, mobile educational software for children, designed to nurture children’s emerging literacy and creativity skills. Created in collaboration with leading preschool education experts, PlayDate Digital content is built in partnership with some of the world’s most trusted global brands for kids and developed and published for iOS and Android devices. More information can be found online at www.playdatedigital.com or “Like” them on Facebook and follow them on Twitter (@playdatedigital).

Hasbro (NASDAQ: HAS) is a global company committed to Creating the World’s Best Play Experiences, by leveraging its beloved brands, including LITTLEST PET SHOP, MAGIC: THE GATHERING, MONOPOLY, MY LITTLE PONY, NERF, PLAY-DOH and TRANSFORMERS, and premier partner brands. From toys and games, television programming, motion pictures, digital gaming and consumer product licensing, Hasbro fulfills the fundamental need for play and connection with children and families around the world. The Company’s Hasbro Studios and its film label, ALLSPARK PICTURES, create entertainment brand-driven storytelling across mediums, including television, film, digital and more. Through the company’s commitment to corporate social responsibility, including philanthropy, Hasbro is helping to build a safe and sustainable world and to positively impact the lives of millions of children and families. Learn more at www.hasbro.com, and follow us on Twitter (@Hasbro & @HasbroNews) and Instagram (@Hasbro).